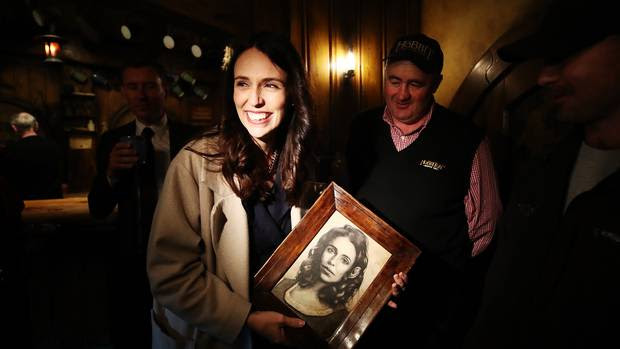 New Zealand Prime Minister Jacinda Ardern holds a drawing given to her by Hobbiton artist Will Bechnan during a tour of Hobbiton. Photo / Getty

The little historic spa town of Te Aroha has for the second time this year been sprinkled with Prime Ministerial stardust as Jacinda Ardern announced nearly $1 million funding to find out if there’s a business case for developing the town into a health and well-being destination.

Ardern, who grew up under the town’s namesake Mount Te Aroha, and whose parents were born there, included Te Aroha in her newborn daughter’s name, delighting residents of one of the country’s most overlooked natural attractions.

The funding also represents one of the first Waikato initiatives to receive support from the Government’s $3 billion provincial growth fund, which will also give $800,000 to finance a business case to develop the Waharoa district, near Matamata, as a sub-regional industrial hub with a food production focus.

Waharoa is already home to Open Country Dairy, Inghams poultry and vegetable producer Balle Bros. Each company has given $25,000 towards the Waharoa project.

Ardern’s announcements at a lunch event in Matamata following her visit to Matamata tourist magnet Hobbiton drew gasps from some 160 local businesspeople who attended.

The event was hosted by the new Waikato economic development agency Te Waka.

Te Waka is looking to pitch 20 to 30 “high-impact” economic development funding cases to the provincial growth fund in the next three months, he said.

They would be from a short list developed from Te Waka’s recent economic forum where more than 200 greater Waikato business people were encouraged to offer ideas for areas and sectors of the region that needed development support.

Even just two years ago, Waikato had received only $85,000 a year in government economic development funding, Brookes said. Aquaculture would be a strong focus of the agency’s initiatives.